To make a donation click the button below or text MOUNTBAKERBSA to 41444.

Thank you for your continued support.

Help us to deliver character-building programs and values to the next generation of community leaders!

Wednesday October 28, 12:00pm
This will be a strictly Online event.

This year’s keynote speaker is: 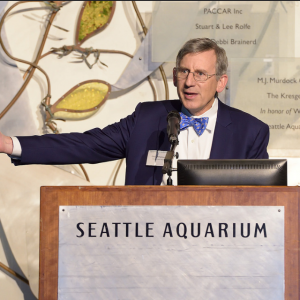 He joined the company in 1997 as the Chief Fin Officer and was asked by his partners to take over as the president when one of his partners died on 9-11.  The Company has grown steadily since then, owing to a seasoned management team whose average tenure exceeds 20 years.

In addition to Ivar’s, Bob is active in the community and sits on the boards of the Seattle Aquarium, the Chief Seattle Council of the Boy Scouts, the Seattle Metro Chamber of Commerce, the Seattle Sports Commission, the Historic Waterfront Association, the Washington Hospitality Assn, and the economic advisory board of the Federal Reserve Bank of San Francisco. He has served an almost every citizens commission and volunteer committee on the waterfront including Colman dock, the seawall, the viaduct replacement, the tunnel and new waterfront park.

Bob and his wife Lisa live in Richmond Beach and have two grown daughters.  He was the first Eagle Scout from Troop 556 in West Allis, WI, and his Eagle card was signed by Richard Nixon.

This is a complementary event, with a request for your financial support of local Scouting’s character building programs. We are working to raise $100,000 to benefit local Scouting. Our 2020 theme is Delivering Adventure and recognizes our mission to prepare young people productive, ethical adulthood.

For information, to organize a viewing party, or to reserve a seat, call Brian Lechner at (425) 338-0380 or email us at brian.lechner@scouting.org.