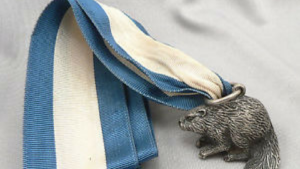 Cost is $35.00 per person until June 2nd
After June 2nd the cost increases to $50.00 per person
Reservations must be made in advance
Registration closes on June 6th

In addition to attending the dinner, you can help the Silver Beavers celebrate this accomplishment by choosing to sponsor a Silver Beaver.  Sponsors who donate $50.00 or more will receive a new, exclusive Silver Beaver patch.

The Mount Baker Council is blessed with many eager and dedicated volunteers. Join us on Saturday, June 9th as we honor six of these outstanding volunteers for their contribution to the Council and the community by awarding them the Silver Beaver service award.

The Silver Beaver was first presented in 1931 and is the highest national award that a Council can bestow to a volunteer within its territory. Silver Beaver recipients are proposed and approved without the knowledge of the individual’s request or participation. Nominations are made by fellow Scouters and community members in recognition of outstanding service.

Oddvar (Arv) Aurdal – As Klahaya District Commissioner for the past 4 years, Arv helps guide the District and brings the values and principles of Scouting to everything he does.   In addition to his service to the Scouting community, Arv is also active with ARC and Special Olympics. He has been a certified volunteer with Special Olympics for 7 years. During his Scouting tenure Arv has served for 5 years as his Pack Committee Chair and 8 years as a Unit Commissioner.

Michael Dyer – Michael currently serves as Scoutmaster for Troop 35 in the Tillikum District. In addition to that role, he is volunteers on the District Committee and as the Assistant District Roundtable Chair. Over the year, Michael has generously shared his knowledge and passion for Scouting as the Wood Badge Course Director, a Day Camp and Twilight Camp Director, and instructor at the University of Scouting, a Merit Badge Counselor, Cub Scout Roundtable Commissioner, and the BALOO Course Director. Outside of Scouting Michael was an active participant in the Royal Rangers and as a volunteer with Junior Achievement.

Kenneth Devero II – Kenneth is an Eagle Scout and active adult leader in the Skagit District serving as the OA Chapter Advisor, the District Committee OA Chair, and Associate Advisor Section W-1N. Kenneth retired from the US Marine Corp as a Lieutenant Colonel and is currently a member of the Skagit County Sheriff’s Department. He is a member of the American Legion and the Fraternal Order of Police. Kenneth has also served as the Chairman for the Navy Marine Relief Society Funds Drive and as a volunteer with Toys for Tots.

Jackie Libby – Jackie’s many roles within Scouting showcase her love for the organization and its impact on youth. She serves as Scoutmaster for Troop 122 and is an OA Staff Advisor. Jackie recruits, trains, and coordinates the weekend volunteer camp hosts for Fire Mountain. She has been BALOO Course Director, a Cub Scout Trainer, and has been Dean and taught at University of Scouting. Jackie believes in the importance of community involvement and has volunteered with Volunteers of America, Big Brothers/Big Sisters, the Student Foreign Exchange Program, and as a Cascade High School Band Chaperone.

Robert Moore III – Robert is an Eagle Scout whose Scouting service has been long and varied. Robert has worked tirelessly on the Council, District, and Unit levels serving as, among other things, Vice President of Marketing for the Council, as an Executive Board Member, as Tillikum District Roundtable Chair, and as a District Commissioner. He has also served as a Cubmaster and Committee Member. Robert was instrumental in getting the Text-To-Give program established within the Council, providing donors an unprecedent ease for donations. As a key component of the Fund-A-Scout program Robert helped to raise over $100,000 in three years, with a record $40,000 being raised in 2016 to help the youth within our Community. Not only is Robert a dedicated Scouter but he works as a Youth Football Referee with the Snohomish County Football Association. He supports the American Heart Association, the United Way, and March of Dimes.

Stephen Pratt – For the last seven years, Stephen has overseen all LDS chartered Scouting Units within Whatcom District. Stephen is an Eagle Scout who also serves as the Assistant District Commissioner for Whatcom District. Stephen believes that youth programs are an important part of youth development and as Stake President – 2nd Counselor he oversees the Stake youth programs including training, service projects, and outdoor activities. Stephen volunteers at the Ferndale Food Bank serving on their Fund Raising Committee while also overseeing the “Just Serve” website.

Join us at the Swinomish Resort Lodge as we honor these fine Scouting and community volunteers.